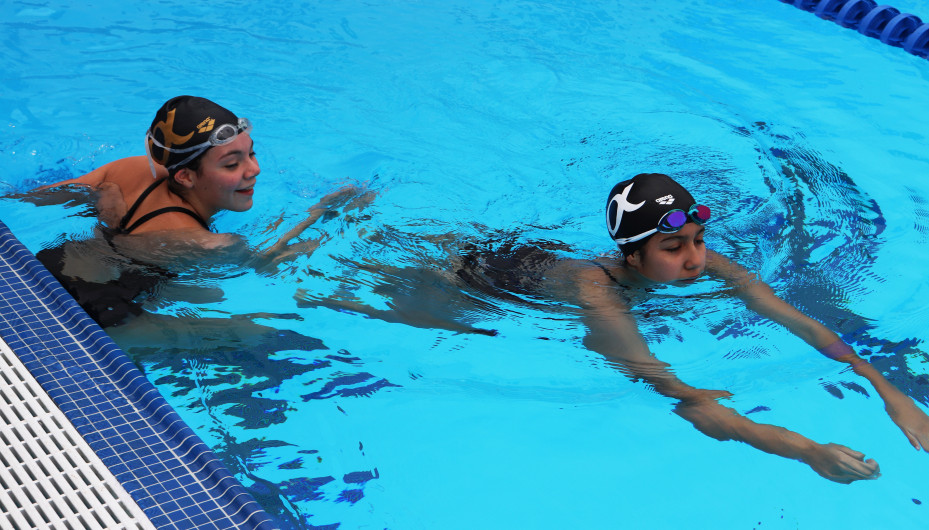 Cloudy skies and chilly temperatures don’t usually have everyone headed to the neighborhood swim center for a dip. But Saturday was no ordinary morning in El Segundo — and this was no ordinary pool. The cool morning didn’t dampen the buoyant mood as the community celebrated years of networking, hard work and fundraising that came together to result in the grand opening of the El Segundo Wiseburn Aquatics Center. “What an amazing place,” said Bill Fisher, who was mayor of El Segundo when the concept for the center came together. The $13.8 million facility boasts an Olympics-caliber 10-lane competitive lap pool — one that can change size and shape thanks to adjustable bulkheads, meaning you can swim in one area and play water polo in another, for example — along with a four-lane teaching pool. The site also includes stadium seating for 500, sports-style lighting, high-tech scoreboards and timing and a public-address system for competitive events.. Located adjacent to Wiseburn High School, the state-of-the-art complex will be used by students at Wiseburn and El Segundo high schools in addition to the city’s Recreation and Parks Department and local swim clubs. Officials hope to woo regional and national events to the site as well. The grand opening caps three years of of planning, designing, construction and fundraising for the facility — and a whole lot of teamwork. A bond measure among the Wiseburn community, located in El Segundo east of Pacific Coast Highway, accounted for $6 million. The City of El Segundo pitched in $1.8 million after an agreement was reached in November 2016. And a fundraising effort led by Richard C. Lundquist, president of Continental Development Corporation, has so far brought in $4 million of a $6 million goal. “We are so proud of this amazing center,” said Lundquist, who is also CEO of South Bay Sports, Health and Recreation, which will oversee the aquatics center. “We’re confident we’re going to meet the fund-raising goal. We’re even more confident now that it’s open. Once people see the center, come out and ‘kick the tires,’ they’re going to want to donate even more.” The cost of the aquatics center has grew over time from $10.6 million in 2015 to $14.5 million a year later, only to be brought down to $13.8 million later that year. “This is a testament to the kind of teamwork that can result when public and private people work together,” said City Council Member Carol Pirsztuk, who served as emcee for the celebration. “El Segundo is the kind of community where things like this can happen.” Corporate donations came from Kinecta Federal Credit Union, the Los Angeles Lakers Foundation, Skechers, Mar Ventures, the Los Angeles Kings and Toyota Motor Sales, among others. Now that the aquatics center is completed, city leaders are next expected to set their sights on renovating the roughly 75-year-old El Segundo Plunge. Read more by The Daily Breeze here.