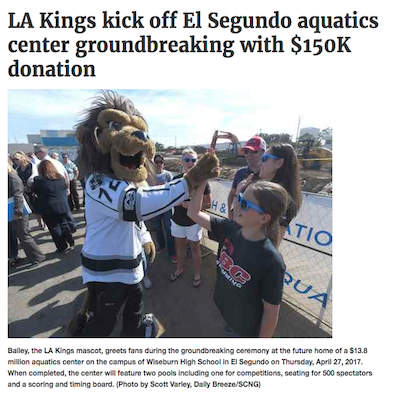 LA Kings kick off El Segundo aquatics center groundbreaking with $150K donation Bailey, the LA Kings mascot, greets fans during the groundbreaking ceremony at the future home of a $13.8 million aquatics center on the campus of Wiseburn High School in El Segundo on Thursday, April 27, 2017. When completed, the center will feature two pools including one for competitions, seating for 500 spectators and a scoring and timing board. (Photo by Scott Varley, Daily Breeze/SCNG) By Megan Barnes, Daily Breeze POSTED: 04/27/17, 7:43 PM PDT | UPDATED: 6 HRS AGO A large group of people participate in the groundbreaking ceremony at the future home of a $13.8 million aquatics center on the campus of Wiseburn High School in El Segundo on Thursday, April 27, 2017. (Photo by Scott Varley, Daily Breeze/SCNG) El Segundo city and school district officials got a helping paw from Los Angeles Kings mascot Bailey the lion Thursday at the groundbreaking of a $13.8 million state-of-the-art aquatics center. The hockey team, which practices in town at the Toyota Sports Center, announced a $150,000 donation to help build the outdoor swimming complex on the site of the new Wiseburn High School, which opens this August. At a ceremony overlooking the massive construction site attended by Olympic silver medalist Sippy Woodhead and a host of local officials, El Segundo Mayor Suzanne Fuentes said the future facility “epitomizes a great community partnership and is a testament to the dedication and perseverance of many community members.” MILESTONE GROUNDBREAKING When it’s completed in the next year, the pool complex at 201 N. Douglas Ave. will feature a 53.2-by-25-meter, 10-lane competition pool with two moveable bulkheads and an expanded shallow entry, a smaller four-lane teaching pool, stadium seating, lights and high-tech scoreboards. It will be shared by the public and students from Wiseburn and El Segundo high schools — an arrangement that was the result of a 2013 settlement agreement between the city and the Wiseburn Unified School District. The idea was to build something that would serve both students and the community at large because the city’s 77-year-old Urho Saari Swim Stadium — or The Plunge — is in dire need of repairs. “Originally, our city wasn’t too excited about replacing a revenue-generating property with a non-revenue-generating school, however, Wiseburn and El Segundo were determined to take the opportunity to arrive at a winning solution for all involved,” Fuentes said. The ceremony marked the culmination of an ambitious three-week “Fill the Pool” fundraising campaign launched by South Bay Sports, Health and Recreation, a nonprofit led by developer and philanthropist Richard Lundquist. The aquatics center is being financed with a three-way funding formula: the city is paying $1.8 million, Wiseburn is covering $6 million, and the nonprofit is coming up with the remaining $6 million. Lundquist said Thursday the group is about 60 percent of the way there. The recent campaign raised almost half of its $500,000 goal, including the L.A. Kings donation, $20,000 from Chevron and a gift from Mike and Barbara Briney. A POOL FOR GENERATIONS In a statement, Kings COO Kelly Cheeseman thanked the city, school district and Lundquist “for leading the charge and providing the kids and families of the South Bay with another resource to stay fit and healthy. We look forward to our players, coaches and staff joining the South Bay community in using this state-of-the-art pool and facility.” Other major sponsors include Lundquist’s Continental Development Corp., Kinecta Federal Credit Union, the Los Angeles Lakers Foundation, Skechers, Mar Ventures and Toyota Motor Sales. “This is the beginning of realization of a dream this community has had for a long time, to build a really world-class facility,” Lundquist said. If his group exceeds the goal, it will pledge $1 million to $1.5 million to renovate the deteriorating Plunge, Lundquist said. Israel Mora, president of the Wiseburn Unified School District Board of Trustees, called the facility a “testament to the power of collaboration” and said it will be “one of the most beautiful aquatics centers in Southern California.” Fuentes also thanked members of the local aquatics community, including those who spent years on committees and task forces to make the center a reality. Even after the project was approved, they ran into a hurdle last year, when its price tag soared to $14.5 million. Designers were able to scale back plans and find ways to save money. “The aquatics community’s passion will be rewarded with the ability to help shape the next quarter-century of aquatics programs in El Segundo and the South Bay,” Fuentes said. Article originally posted on The Daily Breeze: http://www.dailybreeze.com/social-affairs/20170427/la-kings-kick-off-el-segundo-aquatics-center-groundbreaking-with-150k-donation